In support of the Philippine Animal Welfare Society’s campaign for shelter cat adoptions, here is an entry about my own adopted cat Milka and some thoughts on being a cat guardian. 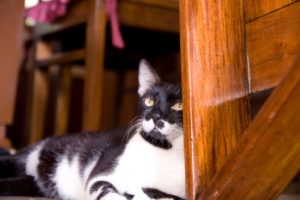 My guess is Milka was around 6 months old when I first saw her – a talented black and white hunter. I would often come home to find her hiding in the wild grasses that grew around my boarding house, stalking her prey – a bird or rat usually. I liked watching her, admiring how frequently successful she was at hunting. For a long while, that was the extent of our relationship – mild interest and passing glances without further thought. I vaguely remember how it progressed from that, perhaps I’d left some leftovers out more times than could be overlooked by a homeless stray, or maybe I was grateful for how she took care of the rat problem indoors as well and wanted to repay her for her hard work. In any case, one day she just decided to move in and for some reason I suddenly found myself each day worrying about where to find that fish I know she loves and never coming home without one. 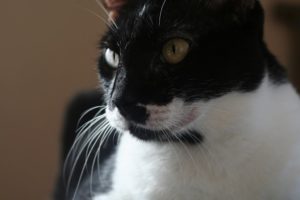 Cat guardians, especially those caring for the common domestic short hair or Pusang Pinoy, often get odd looks from people who have never owned or been owned by a cat. After all, we must be a little bit crazy for sharing our homes with an animal that by many is regarded as little more than a pest found in abundance roaming the streets. Even crazier for giving a damn about an animal whose affections are seemingly so hard won. Why not just care for a dog who will love you even with little effort on your part, whose usefulness is apparent in how he guards our homes and barks at strangers, and makes us constantly feel good because by just looking at your dog you know you are needed and loved?

Dogs have been in my life since my childhood, so before Milka, I never imagined myself a cat person. When you have been living in a dog-exclusive home and find it suddenly occupied by a cat, you will find that applying the measure of a dog to a cat is an exercise in futility and frustration. Where once you could count on immediate affection you will learn to be patient for it. Where once you expected obedience and respect, you will learn to give them first. To say the least, for myself it was an interesting and educational transition. An expansion in fact, because as much as I am a dog person, now I am also a cat person. Heavily and happily afflicted by the cat crazies.

The misconception often is that you can only be one or the other –  either a dog person or a cat person. I say, if you are a dog person, then you are an animal person, and thus you have it in you to open your heart just as much to cat whiskers and purrs as you do to lolling tongues and wagging tails. Get a little cat crazy! Trust me, you will be better off dropping the labels and limitations on where you choose to place your affections. 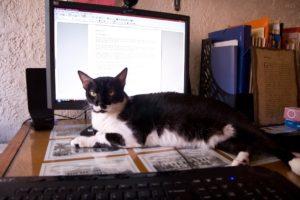 Eight years and many, many cat tales later, Milka still lives with me in Quezon City – healthy and plump, one of seven of my adopted strays. Open your heart and home to a shelter cat.