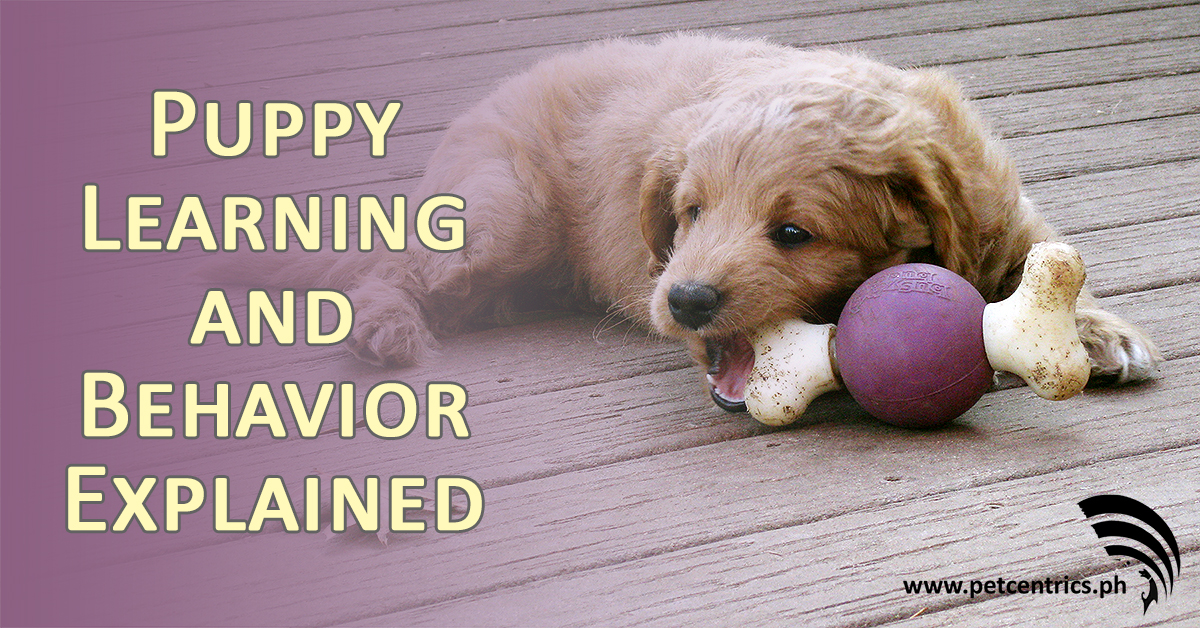 When last I wrote, I talked to you about the decisions you need to make before getting a puppy, where to get your puppy, and how to select a puppy from a reliable source and one that is right for you and your lifestyle.

At this point, you may have already selected a puppy and are preparing for his arrival in your home. In preparation for your new puppy, I want to share with you some crucial information that will guide you through the first weeks and months of living with your puppy.

For this first series of articles, we’ll be focusing on the aspect of puppy learning and behavior, and how to go about training your puppy his first lessons in home manners and basic obedience.

This is the FIRST article in the Puppy Training Prep Series

When Does Learning Begin?

To prepare you for the puppy training that’s to come, I need to start you off on your own education about how puppies learn and why they behave or misbehave as puppies do.

Regardless of whether you have already welcomed your puppy into your home or if you are still anticipating his/her arrival, by following this series of articles you have a great opportunity to start your puppy off on the right paw. Your new puppy is pretty much a clean slate. At this stage, he has not yet learned any or, at least, not too many naughty behaviors that might be difficult to train him out of doing.

Many other clients who have not had the opportunity to receive the information I will be providing you, unfortunately, come to me for help much later with a wildly uncontrollable, misbehaving puppy or young dog that they believe is somehow broken and in need of fixing.

Overwhelmed owners then begin to see their dog as abnormal in some way because he is not being obedient. They often think this of their pup because they unfairly compare him with a well-behaved adult dog of the same breed, with another dog they have previously owned, or with a well-trained dog that they’ve seen performing in a television show or movie.

To tell you the truth, most if not all puppies and young dogs that I’ve met and evaluated, are actually completely normal and behaving as any pup would: as living beings in a dynamic state of learning, continuously developing according to their experiences from the moment they were born. Many dog owners end up with misbehaving puppies because they overlook this important fact – that learning in puppies begins from Day One.

Indeed, it is a shame that many people – falling prey to the adorable nature of puppies – allow their puppy to “just be a puppy” for the first weeks or even months of their puppy living with them. All the while they enforce no rules or discipline of any sort. Moments of naughtiness are frequently captured on camera for posting on social media with the caption reading “How cute is that? :)” By the time the puppy is older, bigger and stronger, he has already learned quite a number of things – no longer as cute or adorable as before – which may include things like what amount of force is necessary to knock over the trash bin, or which footwear makes the best chew toy, or where in the house they can go to relieve themselves – the answer being “everywhere”.

Learning in puppies begins from Day One.

Now that you understand that learning begins from Day One, you also understand why it is important to start training your puppy immediately when his life with you begins.  For you to be able to train your own puppy, let’s start first with understanding what motivates a puppy, and how the puppy learns good or bad behaviors.

Your Puppy Is Governed By NEEDS and WANTS

The reason puppies engage in any sort of naughtiness is because these behaviors help them achieve their needs or wants. For example, your puppy knocks over trash bins because he wants access to yummy food hidden inside. Chewing on footwear fulfills a natural instinct, a need to work his mouth and chew on something. Pooping and peeing wherever achieves the need to relieve a full bladder or bowels.

Interactions with the environment teach a puppy which behaviors work and which don’t work in his quest to achieve needs and wants.

Unfortunately, not all these behaviors that a puppy learns passively or accidentally are what we humans find to be pleasing or appropriate. But here’s another thing you must bear in mind: human rules and boundaries do not innately govern a puppy’s thinking. Your puppy arrives at your home without any concept of what the rules are. Neither does a puppy offer good behavior simply to win your approval. He does it because he knows there is something in it for him. As renowned trainer and canine behavior expert Jean Donaldson asserts in her book The Culture Clash, dogs look out for Number One – themselves – and they are not born with a natural desire to please humans.

It’s a big concept to wrap your head around, especially if you’ve been stuck with the notion of dogs being faithful and loyal human companions that never demand anything in return but for your love and affection.

The age-old concept that dogs unconditionally love to please us and work for us simply because they are “man’s best friend” is probably the reason many dog owners have lofty expectations that sets many dogs up to be a disappointment to their humans.

You may be worried that this means your puppy cannot ever truly come to love you or see you as anything other than a controller of resources. Of course that isn’t true! Deeper bonds and complex relationship dynamics will most certainly form and develop between yourself and your dog in the long run as you share more and more experiences together. But, as a starting point in your relationship, the truth – as unromantic as it may sound – is that to your puppy, your value to him only begins to be apparent once he recognizes you as a source of his basic needs and wants.

Your Misbehaving Puppy Is Not Being Spiteful

From what you’ve learned so far, you can see how we really needn’t complicate common behavior issues with false ideas about a dog trying to be dominant, trying to get back at you for some injustice that was done on him, or trying to vex you just for the heck of it.

The table below examines the motivation – the need or want – behind several common puppy behaviors: 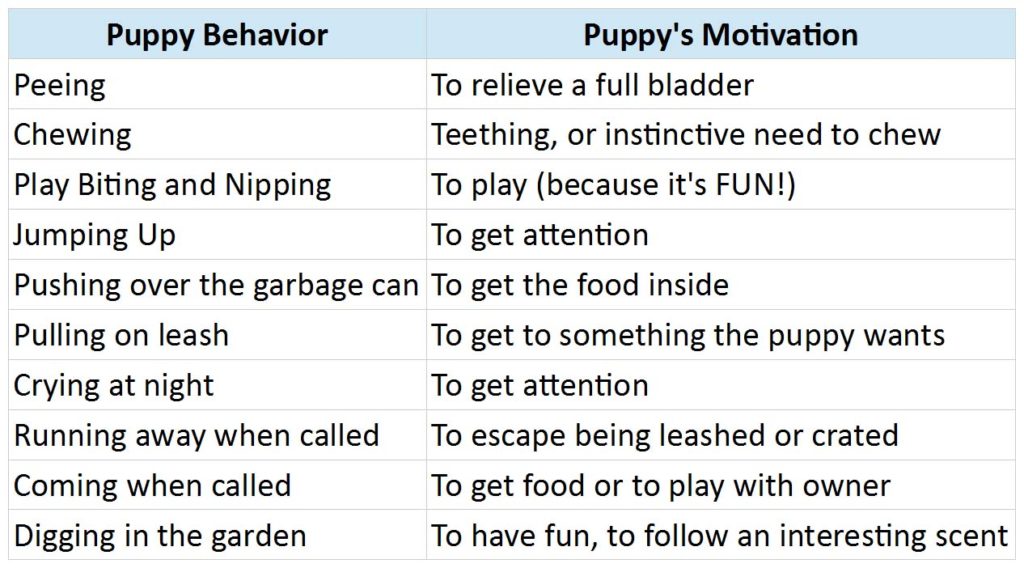 As you can observe from the table above, dogs, and especially puppies, are pretty linear in their approach to things they need and want. Meaning that they are likely to choose the most straightforward path to achieve their goals. They do not plot elaborate schemes nor are they hiding secret agendas of domination from you.

Some chosen paths, that is to say, some behaviors, prove to be more effective than others in getting what a puppy needs or wants, and, therefore, these behaviors become reinforced. The puppy keeps repeating the behavior because he has observed that this has worked in the past. This is the puppy learning what works and what doesn’t work.

How Does Knowing This Help You Train Your Puppy?

Understanding the motivation behind some behaviors is important because it helps us to direct the motivation towards behaviors that we actually want the puppy to do. That is to say, driven by the same motivation, we show the puppy appropriate ways to achieve his needs and wants.

For example, if the puppy wants attention from us he has to sit. At the same time, you must make sure that you do not inadvertently reward any wrong behaviors that the puppy is doing to get attention.

Many owners don’t realize that they inadvertently reward many wrong behaviors when they allow the puppy to achieve a need or want from performing an inappropriate behavior. The best example of this is for the often inadvertently rewarded behavior of jumping up:

Imagine a puppy that is coming to greet you when you get home from work. The puppy wants your attention, and therefore, he jumps up on your legs to get it from you. Without even thinking about it, and disarmed by the puppy’s cuteness, you bend down and happily interact with the puppy as he is jumping up. In that moment, you have shown the puppy that getting attention can be achieved by jumping up on you. That might not seem like such a bad thing. But what if at some later time, you come home from work, tired and aching to get some rest. You open the door and are immediately greeted by your exuberant dog – much larger and stronger now than he was as a pup – demanding attention through the one behavior that he knows works to get what he wants. At this point, as you can imagine, the jumping up behavior, which you have inadvertently trained your dog to do, becomes quite problematic.

In some cases, we are unable to discern the exact motivation behind certain behaviors. If so, rather than wasting energy in investigating the motivation, it becomes more productive for us simply to exert our effort towards motivating the puppy to perform another behavior that redirects from the original inappropriate behavior.

To summarize, here’s what you learned in this article:

I hope you found this article about your puppy’s learning and behavior enlightening. To end with, I want to put you to the task of really observing your puppy over the next few weeks, as soon as he/she arrives, to understand what motivates your puppy to engage in certain behaviors, be they naughty or otherwise. This will be useful to you once you learn more about training your puppy.

COMING UP: In the next article of the Puppy Training Prep series, I will be discussing the Pet Centrics 3-Step System for Puppy Training, so that you can direct your puppy’s motivation towards learning behaviors that are appropriate and useful around the house and in your puppy’s daily life with you.