When discussing spaying or neutering with a client I often find that the pet owner either has absolutely no idea what I’m talking about, or that the he is averse to the idea of subjecting his dog (or cat) to what seems to him is an unwarranted surgical procedure.

For those that do not know what spaying or neutering means here are the simple definitions:

Why do this to a pet? 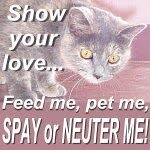 Spaying and neutering – also referred to as sterilization or having your pet fixed – are humane measures taken to control animal populations by preventing animals from “accidentally” getting pregnant and giving birth. Accidental or unplanned pregnancies of pets give rise to unwanted puppies or kittens (or offspring of other companion animal species) which end up as unfortunate strays that roam the streets when they are unable to find good homes.

Upon finding out what spaying or neutering are all about, many Filipino pet owners will give one of many common excuses for why they don’t let their pet get sterilized. Let’s take a look at these excuses – some applicable to cats, some to dogs, and some more applicable to one gender than the other – and see if we can’t debunk them one by one:

Excuse #1: “It’s dangerous for my pet to get operated on.”

Spaying and neutering are procedures that are routinely done by veterinarians on dogs and cats (and other companion animals). Rarely do complications arise after a spay or neuter. Certainly no surgery is ever 100% risk free, but a competent veterinary surgeon will take all measures to ensure that the risks are reduced to a minimum. Expect that before your veterinarian even considers surgery she may require pre-operative blood tests and a complete physical examination. Also expect that the surgery will take place in a clean operating room and using clean surgical instruments and aseptic techniques. After the surgery, your vet may prescribe antibiotics and provide instructions for wound cleaning and post-operative care. Will your pet feel pain? With proper anesthesia your pet should feel very little to no pain as the surgery is taking place. Following surgery, discomfort is to be expected. Pain killers are not always prescribed because pain in itself is a useful restraint to keep the pet from moving about too much while in recovery. However, if you feel your pet is in too much pain and think that he would benefit from pain killer medication consult your veterinarian.

Excuse #2: “My pet won’t be the same after he/she gets neutered/spayed.”

It is true that sterilization may have some effects on behavior. In fact, spaying and neutering are often recommended by vets as a solution for behavior problems such as aggression and territorial urine marking. But in general, as a result of reduced hormonal surges following sterilization your pet will likely become calmer, less territorial and consequently more manageable, especially if you couple the sterilization procedure with good training.

Excuse #3: “But puppies would be so cute to have around!”

Yes, puppies (and kittens for that matter) are cute and lovely to cuddle. But they also eat, pee and poop in growing amounts as they grow older. Puppies and kittens don’t stay puppies and kittens forever. Despite our promises to love them for the entirety of their lives, very few of us actually have the resources to support more than the one pet that we originally planned for. Be fair to your pet and to yourself and do not add to your family of canine or feline companions unless you have the time and resources to do so, and even then I would urge you to choose adoption over reproduction as there are already so many strays and shelter animals that are searching for a home.

Excuse #4: “My dog is so awesome, it would be a shame not to let her pass her genes down to her puppies. I want something to remember her by.”

An awesome dog does not guarantee awesome puppies. I have heard it countless times before: dog owners complaining that their dog’s offspring are nothing like her. In my opinion, the “awesomeness” of your dog is defined by the great relationship you have with her and that is something genetics plays no part in. Furthermore, I believe that this need to have our dogs provide us with offspring is more a reflection of our fear of losing our beloved pet sooner than we are ready to let go. Value your pet for her uniqueness and her unique relationship with you and remember her by making as many great memories as you can with her. Your next dog will be just as awesome in its own way if you are as devoted to her as you are to the one you have now.

Excuse #5: “I don’t want to deprive my pet of the pleasures of having sex!”

Believe it or not, I have heard this excuse from owners, many times in fact. A common joke we vets make to owners who give us this excuse is that your dog (especially male dogs) can still engage in these carnal pleasures with the added bonus of being free of commitments after the act. The sexual drive of many neutered male dogs still remains intact even after they have their testes removed. And in general, machismo does not suffer from the loss as many male owners of male dogs are inclined to think. Really all you are taking away are the sperm!

Spaying and neutering are preventive measures that will spare you from future vet bills accumulating when your dog or cat gets sick because of a disease associated with its reproductive organs. Therefore, it is a worthwhile investment, especially considering that it could lengthen and improve the quality of life of your dog. Many good veterinary clinics in the Philippines do spays and neuters at reasonable costs, some even have free spay-and-neuter days that many pet owners can take advantage of.

Regardless of whether or not your dog is the only dog in your household, and even if you can make guarantees that she will never mate, it is still better for your pet’s health that she be sterilized. An un-mated female can in adulthood succumb to a disease called pyometra in which the uterus becomes infected as a result of hormonal imbalances in the dog. When I explain this to my clients who own female dogs that they do not intend to get mated, the client will often counter saying that in that case they will have her get pregnant at least once then just to circumvent the risk of pyometra. It is a humorous suggestion at best, because the risk of pyometra does not end with one pregnancy. And what about the puppies born from this pyometra-preventing pregnancy? You are better off having your dog spayed than letting her get pregnant just to keep her from getting sick.

In summary, most of the excuses that we vets hear regarding spaying and neutering are based on a lack of awareness, misinformation and client fears. But the fact is spaying and neutering are part of responsible pet ownership and should be one of the primary considerations when acquiring a companion animal. The procedures are routine and generally safe for pets if done by a qualified veterinary surgeon, and they are acceptable, humane ways to control dog and cat populations, which spares many puppies and kittens from becoming strays.

Be a responsible pet owner. Have your pet spayed or neutered. 🙂