For Love of The Asong Pinoy (continued) 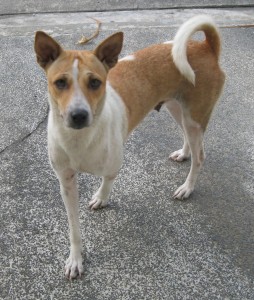 For Love of The Asong Pinoy (continued)

To Dr. Manalo: Thank you for your feedback (see comments in the previous blog entry). Your thoughts are certainly important in this discussion since you are the chief proponent of the Philippine Aso Project.

I have studied the documents you listed and I have read the comments from your facebook group members. Let me correct some statements from the original blog by paraphrasing the definitions and information you have provided:

The Philippine Aso Project should not be mistaken for an attempt to promote the Aspin. It does not take a stand one way or the other regarding the Aspin – defined as any dog that is not purebred (i.e. not conforming to a standard as determined by humans), which includes the crossbreeds, or mixed breeds and also the native dogs. What the Project IS concerned with is the creation of a pure breed of dog through active selection and regulation of the breeding of those dogs that are “representative” of the native dog or landrace population. It is concerned with removing “adulterations” from the native dog population that were contributed by established breeds.

My concerns, however, remain valid despite these clarifications. Despite your assertion that the Aspin issue is a separate one altogether, I maintain myassertion that this project does have an impact on how the non-pedigree dog is regarded locally. Presently, there is a very real double standard in existence – many dog-owners who own a pedigree dog and who at the same time own an Aspin feel that the pedigree dog deserves a higher standard of veterinary care. I cannot count the number of times I have visited a dog-owning home, wherein the pedigree dog has the privilege of living indoors, getting the best food and having complete vaccinations, while the Aspin is fed scraps and is kept in a cage or tethered outside the house, exposed to all the elements. Many vet colleagues will have similar stories to tell, I’m sure. There IS discrimination present. Creating and then promoting a new breed is counter-productive to the cause of local welfare groups who have exerted much effort in eliminating this discrimination and promoting the idea that all dogs are equal.The impact this Project will have on their effort begs much consideration and should not be overlooked. To the superficial Filipino dog-owner, the message that may be unintentionally conveyed is that being impure is of lesser value and should be excluded. Sadly, I don’t think I would be wrong to say that currently the majority of Filipino dog-owners are of the superficial kind.

My concerns are also for the ultimate genetic soundness of this breed you intend to create. Traditional breeding of companion animals uses parent and sibling mating to fix traits and produce true breeding lines and, I assume, this Project will need to proceed in a similar fashion. This sort of selective breeding to isolate “desirable” characteristics can cause many recessive phenotypes and genetic disorders to surface. Very quickly the natural selection that produced the hardy native dog that we admire can be undone. I wonder, how do you plan to circumvent the pitfalls of inbreeding while you are trying to fix traits and produce a true-breeding line? Is there a team of qualified scientists working on this project with you that can safeguard the sound genetics of the breed you are creating – not only in the stages of its inception but also further down the road when the breed is established? What sort of medical and genetic screening will be conducted? How do you plan to regulate the breeding of this dog?

Furthermore, animal welfare concerns must also be taken into account here. A 2006 report by the Companion Animal Welfare Council of the United Kingdom that I discovered states that “…Historically at least, most companion animal breeding has been undertaken in pursuit of specific aspects of performance, appearance and temperament…with little or no specific regard to the possible welfare consequences…Many problems with clear welfare consequences are known to have arisen in association with selection for specific traits or suites of traits.” So I also ask, will animal welfare organizations be represented throughout this endeavor and will their concerns be taken into consideration?

My point with these questions is to emphasize to everyone that breed creation is no small undertaking and is an immense – or an even beyond gargantuan responsibility. You are essentially playing God and presume to know better than nature what traits should be selected and propagated.

With this I conclude that I personally do not feel that breed creation should at this point be a priority or that it is a favorable endeavor in a country wherein dog breeding practices are not regulated, and whose majority presently has a very poor understanding of animal welfare. It is unlikely that I will ever be convinced that this Project is a worthwhile undertaking and, as they say, we will have to agree to disagree. I am of the opinion that there are enough breeds of dogs out there to satisfy the whim of any dog person.

Permit me to ask: Why is it even necessary to create a Philippine Aso breed? How does it positively contribute to Philippine dog culture and the elevation of Philippine dog husbandry standards?

To say that we will have a Philippine breed of dog to call our very own may be enough to validate this project for some. For me, that rationale does not suffice. As I’ve said, I believe this kind of thinking betrays our fascination for labels and our view of the dog as a product and brings to light our Filipino insecurities.

It takes nothing away from us Filipinos to be a nation without its own pure breed of dog. In my opinion, a more worthy use of our time and energy is to improve local animal welfare, as this is one thing that does greatly reflect our maturity as a nation.

Again, I invite supporters and critics of the project to comment and air their opinions. Hopefully, this time around contributions to the comment thread will remain courteous and remain focused on the topic that is being discussed.

The Price of a Pedigree

The Companion Animal Welfare Council’s Report on Welfare Aspects of Modifications, through Selective Breeding or Biotechnological Methods, to the Form, Function, or Behaviour of Companion Animals